You are here: Home / Nomination Form 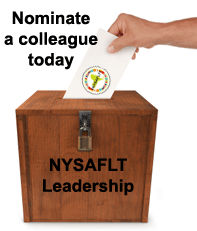 The NYSAFLT Nominating Committee needs YOU to solicit and make nominations for the 2023 NYSAFLT election. Any NYSAFLT member in good standing may submit a nomination.

The deadline to submit a nomination is February 17, 2023.

Fill out my online form.
Scroll to top